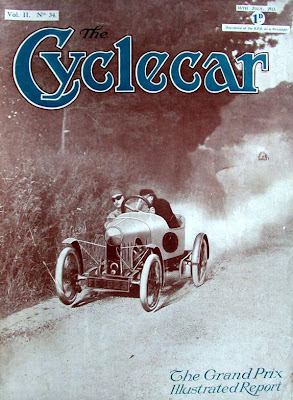 The origins of the term ‘cyclecar’ go back to a series of articles, starting on the 6th December 1910, in Motor Cycling which drew attention to the possibilities of the monocar and the duocar. These vehicles were more weather-tight than a motorcycle but less so than a car. Initially they were neglected by both the Royal Automobile Club and the Auto-Cycle Union. The Clubs' attention was drawn to this oversight and after much discussion, a joint Committee came up with the term ‘cyclecar’, defined as a machine of three or four wheels, with an engine of less than 1100 cc and the chassis weight of less than 6 cwt. Total weight was set at less than 7cwt. At the same meeting, held in the spring of 1912, control of the cyclecar was given to the Auto-Cycle Union and cyclecars were shown at the Cyclecar and Motorcycle Show at Olympia in 1912. An important exhibit at this show was the GN. Also significant was the later generous fiscal treatment of cyclecars by tax authorities in certain countries, notably in France where a cyclecar was defined as a vehicle with a capacity of 1100cc or less and a weight 350kg or less, rather than 7cwt.