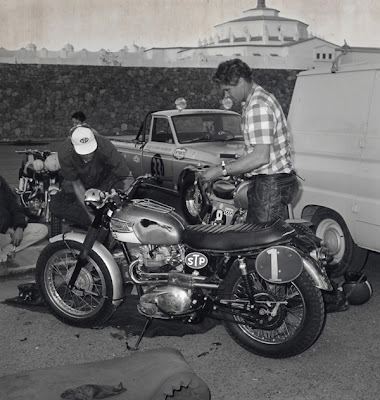 (on right) Via: motorcycle racers.tribe

Bud Ekins (May 11, 1930 – October 6, 2007) was one of the foremost stuntmen of his generation. Born in Hollywood, California, he is known to most as the actor who jumped the fence in The Great Escape, and who drove the Ford Mustang 390 GT in Bullitt. He also co-ordinated the stunts for the popular 1970s motorcycle cop show CHiPs.

Ekins regularly contributed to documentaries and biographies on Steve McQueen with some authority, given their close friendship until the actor's death in 1980.

For years, movie fans believed the big barbed-wire fence jump at the finale of The Great Escape to be McQueen, although this is Ekins, with McQueen undertaking the rest of the bike work himself, the film's producers too nervous to allow him to make the iconic jump in person."