The Art of Michael Leeds. 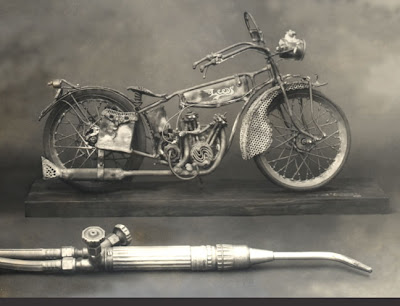 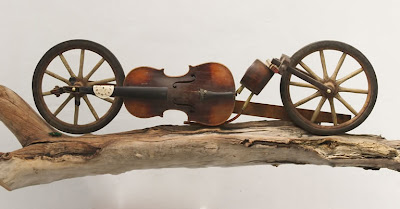 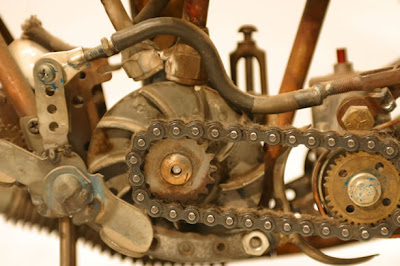 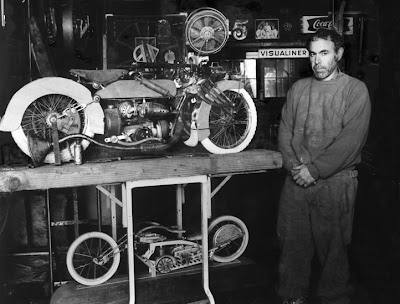 Portrait of the artist: Michael Leeds
By Mike Connor Via: Metroactive

"With his worked-in overalls and a red net and foam cap reading, "American by Birth, Southern by the Grace of God," Michael Leeds could be a farmer, a mechanic, a redneck, or all three.

But it turns out the hat is just a joke. And after talking to Leeds about his art, I realize that really he's just your average visionary mechanic of the cosmos. His current show at the Felix Kulpa gallery--a culmination of 30 years of work--is a collection of miniature vintage motorcycles that, upon closer inspection, reveal the artifacts that comprise them: Ice cream scoops, omelette pans, golf clubs, training wheels.

It's as if Leeds is really an archeologist from the future, gathering clues about an Americana that is already rusting away into oblivion. He talks about our culture as if it's dead and gone, often referring to us as "they." It makes for oddly unsettling conversation, somehow both complimenting and yet fundamentally contrasting with the comforting retro aesthetic he invokes.

"People ask, 'Where did all this fucking shit come from?'" says Leeds. "I go through life and the parts come to me; I'm like a conjurer."

Each bike is meticulously crafted from pretty much anything Leeds can get his hands on--as long as it's rusted to perfection. The bikes have a beautifully authentic vintage look, exhibiting Leeds' gift for sleight-of-hand and metaphor. Suddenly an omelette pan is a completely convincing set of fenders for a touring road bike. And somehow it becomes perfectly natural to appreciate the classic beauty of said omelette pan in all of its dented, corroded glory.

The bikes are often themed into what Leeds calls "time signatures," meaning that the parts correspond roughly to the era of the particular style of motorcycle. Other themes are more obvious, like the "Cafe Cinema" bike made out of film reels and espresso machine parts, or the "Time Machine" made out of various vintage watches and lenses. But as inherently unique as each piece winds up being, Leeds insists that they all have a strangely sinister quality in common.

"All these pieces, they bear the mark of the machine that made them," says Leeds. "Suppose they exist 2,000 years from now. Archeologists could see the measure of our technological skills through each one of these parts. And they would see something else, also. They'd see style."

Leeds' artistry shines not only in his ability to imitate particular styles of motorcycles with random junk, but also in his tongue-in-cheek use of, say, an actual alligator head standing in for an alligator-skin seat, or the egg beater embedded in the "Town & Country Scrambler."

He's been smitten by motorcycles since he was just a lad, but Leeds attributes his talent for found-art composition to what he calls his "industrial disease"--he's always paid attention to the "flotsam and jetsam of our society," and has even boiled his fascination down to the stuff of myth.

"My passion is fueled by what I call the Promethean Gift," says Leeds. "It's like man sniffed this piece of metal into his brain, and all these metallic things got into his dreams and he started envisioning planes and cars and armor and all these cool things. It's what starts us on this idea, this ability to visualize, to take what we have in the world around us to help manifest our vision, our dream."

Leeds thinks the general cultural fascination with motorcycles is hitting an all-time high, as evidenced by the success of the Guggenheim Museum's "Art of the Motorcycle," which broke all preceding attendance records during its exhibit in 1998. With the help of digital artist Guy Siratt, Leeds is selling autographed digital prints of the bikes instead of selling the bikes themselves, so that the exhibit can travel far and wide in its entirety. Which of course means that you won't be able to take anything home except the print--Leeds' watchful brother and a sturdy steel cable will make sure of that."

Email ThisBlogThis!Share to TwitterShare to FacebookShare to Pinterest
Labels: Art