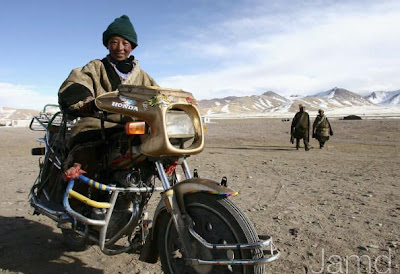 "On a recent afternoon, on the road outside the small city of Huashixia, a cluster of motorcycles had stopped at a stalled jeep. The jeep belonged to the fourth incarnation of the Lama Drabu, 68, a living Buddha from a nearby monastery. He had been traveling to collect some stones etched with Tibetan prayers when his jeep had blown a tire.

One man offered Drabu a sip of barley wine. A young monk in a maroon and saffron robe grabbed the punctured tire, jumped on the back of another man’s motorcycle and off they rode to a repair shop. Asked if he had ever ridden a motorcycle, Drabu said he had not. But, he added, he was not disconnected from the motorcycle world.

“Some people bring me their new bikes to bless them,” he said.

Via: home and away

Email ThisBlogThis!Share to TwitterShare to FacebookShare to Pinterest
Labels: Culture