The Grateful Dead Movie, released in 1977 and directed by Jerry Garcia, is a film that captures performances from the Grateful Dead's October 1974 five-night stand at the Winterland Ballroom in San Francisco. This end-of-tour run marked the beginning of an extended hiatus for the band, with no shows planned for 1975. The movie also faithfully portrays the burgeoning Deadhead scene. The film features the "Wall of Sound" concert sound system that the Dead used for all of 1974. 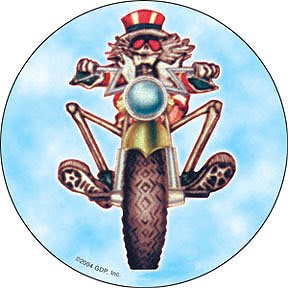 At the beginning of the movie, are animated scenes of icons from Grateful Dead art such as the Chopper-riding Uncle Sam skeleton. This psychedelic inspired animation was created by Gary Gutierrez.