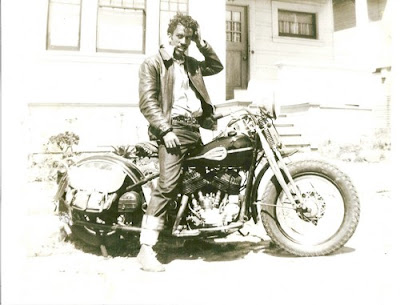 "Ever heard of Bessie B. Stringfield? Most likely not. Stringfield was an African American motorcycle enthusiast who flouted Jim Crow segregation and sexism when she hopped on her bike in the 1930s and took a tour of all 48 contiguous states of the Union.

Her story is a solid metaphor for black bike culture: a story that is equal parts fierce individualism and a quest for a life without boundaries but which also points to a legacy that has largely existed in history's shadows.

Just after World War II, black Californians began carving out their unique take on bike culture through design, riding styles, racing and riding tricks. The exhibition spotlights innovators such as Ben Hardy, (below) who designed the Captain America and the Billy Bike featured in "Easy Rider," and explores the history of all-black clubs such as Buffalo Soldiers, LA Defiant Ones, East Bay Dragons, the Magnificent Seven and Rare Breed. 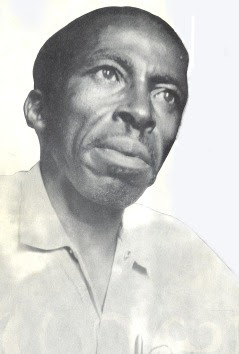 Ben Hardy
Alongside historic and contemporary photos, restored and custom bikes also will be on view -- all of it puzzle pieces that help to complete the picture of California's idiosyncratic history of the road. The show runs through April 12"

Email ThisBlogThis!Share to TwitterShare to FacebookShare to Pinterest
Labels: Culture

Oh that was awesome... Love to read stories about african-american riders. Makes me feel a little more complete with my passion for motorcycles. Thank you for this post. You couldn't imagine how much it has done for me and what it means to me as well.