"Never Say Never Again, released in 1983, is the second screen adaptation of Ian Fleming's novel Thunderball and a non-EON Productions remake of the 1965 James Bond film of that name. It starred Sean Connery as the famous British Secret Service agent (as did EON's Thunderball), and was released theatrically by Warner Bros. 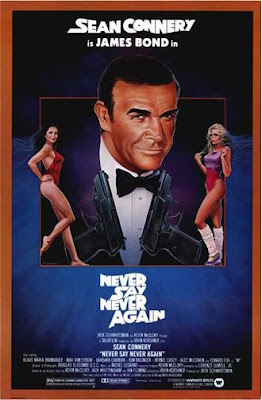 Although the film was not part of EON's Bond film franchise produced by EON and United Artists, subsequent mergers and dealings mean that it is currently owned, like the series, by United Artists' parent, Metro-Goldwyn-Mayer: MGM acquired the distribution rights in 1997 after its acquisition of Orion Pictures. 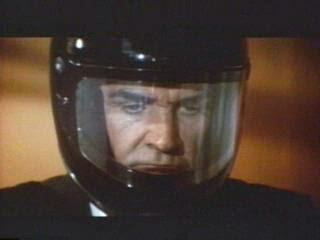 Never Say Never Again follows a similar plotline to the film and novel Thunderball, but with some differences.

The film opens with a middle-aged, yet still athletic James Bond making his way through an armed camp in order to rescue a girl who has been kidnapped. After killing the kidnappers, Bond lets his guard down, forgetting that the girl might have been subject to the Stockholm syndrome (in which a kidnapped person comes to identify with his/her kidnappers) and is stabbed to death by her. Or so it seems.

In fact, the attack on the camp is nothing more than a field training exercise using blank ammunition and fake knives, and one Bond fails because he ends up "dead" (a previous "fake" mission saw his legs get blown off by a land mine). A new M is now in office, one who sees little use for the 00-section. In fact, Bond has spent most of his recent time teaching, rather than doing, a fact he points out with some resentment.

Feeling that Bond is slipping, M orders him to enroll in a health clinic in order to "eliminate all those free radicals" and get back into shape. While there, Bond discovers a mysterious nurse (Fatima Blush) and her patient, who is wrapped in bandages. His suspicions are aroused even further when a thug (Lippe) tries to kill him.

Blush and her charge, an American Air Force pilot named Jack Petachi, are in fact operatives of SPECTRE, a criminal organisation run by Ernst Stavro Blofeld. Petachi has undergone an operation to alter one of his retinas to match the retinal pattern of the American President. Using his position as a pilot and the president's eye pattern to circumvent security, Petachi infiltrates an American military base in England and orders the dummy warheads in two cruise missiles replaced with two live nuclear warheads, which SPECTRE captures and uses to extort billions of dollars from the governments of the world.

M reluctantly reactivates the 00 section, and Bond is assigned the task of tracking down the missing weapons, beginning with a rendezvous with Domino Petachi, the pilot's sister, who is kept a virtual prisoner by her lover, Maximillian Largo. Bond pursues Largo and his yacht to the Bahamas, where he engages Domino, Fatima Blush, and Largo in a game of wits and resources as he attempts to derail SPECTRE's scheme.

Bond's Yamaha XJ650 Turbo Seca "Spybike" Pict via: imcdb
In this film, Bond does not have his usual specially modified car, in favor of a mildly armed motorcycle (above) that Algernon promises to send him if he can "get it to work"