The Art of kurt Wold. 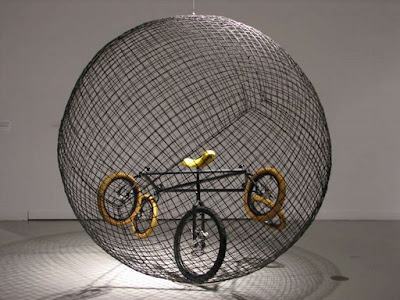 "The Ancient Greeks (Plato more specifically) established a hierarchy in the arts, by elevating the purely contemplative art forms from the lower, functional crafts. This idea again struck me as I was taking down yet another of my gallery installations and jamming the mere functional remains into a dumpster. I had adopted a belief that artistic expression was a vital bridge, spanning the distance between idea and reality, which, in turn, established a situation of exchange for both mental insight and physical experience. It was through this belief that I made artworks for the gallery.

However, back in 1987, in a parking lot, in a dumpster, I had questions. I could envision a painting which inspired awe throughout the gallery, being relocated in the parking lot, where every patron would drive over it, as they backed their cars out and headed home. I saw that the gallery had become the sanctuary for the pure, contemplative art object, and that the gallery walls protected it from the realities of functional mundanely. This rarified space, filled with what appeared to be objects which could not support life on their own, seemed completely non-vital to me. I was moved to reincorporate the contemplative and functional in a body of work.

The bicycle, I thought, would be the natural vehicle. Aesthetically it engages the viewer immediately with its figurative suggestions and strong, compositional geometries. And, because it is a functional machine with a commonly shared childhood experience, I felt it elicited a kinesthetic accessibility for the viewer. Folk wisdom claims that you never forget how to ride a bicycle.

I remember as a child being schooled on the inventive spirits of Thomas Edison, Benjamin Franklin, and the Wright Brothers, the latter who took the seminal machine of that time -the bicycle- and invented the airplane. Of course today’s advances in technology leave one about as uncomfortable as staring at the instrument panel of an airline jet. Human tools are rapidly converting human beings into human subjects, who regularly pray and curse at their cars and computers. In a somewhat Don Quixote fashion, I make these machines to remind myself and others what it means to be human, what restrictions are implied therein, and what dreams seek expression beyond." 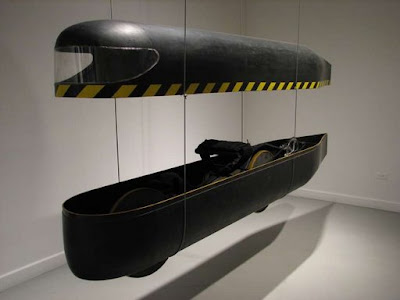